PCNL, percutaneous nephrolithotrypsy – endoscopic procedure with the aim of kidney stones removal. It is performed usually in general anaestesia or rare in the spinal one. The patient is laid in front or in supine position. At the first stage of the procedure there is introduced very thin catheter (2mm in diameter) into the renal collecting system through the urethra and the ureter. With this catheter, after the pain is killed by anestesiologist, urologist will fill the collecting system with saline to widen one and facilitate precise puncture of the renal calyx and afterwards to fill one with the contrast medium to follow the advancement of the renal tract widening. When the collecting system is filled with saline through the catheter and looks quite widened, the needle is introduced through the skin into the fornix of the renal calyx with the ultrasound guidenance, usually the lower calyx is punctured, the middle sometimes as well, but rare the upper one. In spite of very dense blood vessels in the kidney, there is quite safe area in some parts of the kidney, where access to the collecting system through the renal cortex is safe. If the top (fornix) of the renal calyx is precisely achieved with the puncture needle, the bleeding is very small and the PCNL is very safe in terms of blood loss and harm to the kidney. After the needle gains the collecting system (this fact is visualised on the flouroscopy) there is introduced guidewire with the floppy tip through the needle channel. In the next step the needle is removed, but the wire is left intact and used as a guide for the wider and wider dilators introduced one on one. This technic alows to only dilate the renal channel but not to destroy the renal cortex which is only compressed by the widest dilator during the procedure. All the steps of channel dilating are controlled by the fluoroscopy (radiological guidenance). In Poland every step is performed and controlled by the urologist with the assistance of the radio-technician to control the RTG device as opposite to US and UK and probably other countries, where all the hard work is done by the interventional radiologists and the urologist is only involved in stone removal. When the last dilator is advanced, all the previous staff is removed and the nefroscope is introduced into the collecting system. When the stone is located the lithotripsy is then started. There are many kinds of different lithotripters, the most popular are ultrasonic, balistic and based on the laser energy, some of them as ultrasonic ones have the ability to suck the debris appearing with the advancement of the lithotripsy. The bigger fragments of the stones can be removed with small forceps, special kinds of baskets or other sophisticated devices. Still the procedure is controlled with the fluoroscopy. When the stones are desintegrated and removed the completness of the stone removal is controlled on the fluoroscopy screen, if confirmed the drain is introduced with the dilator sheeth into the collecting system, the sheeth is removed and the procedure is going to be stopped. The wound is sutured and the drain fixed to the skin. The purpose of the drain is to pipe away the urine and the blood from the kidney in the very postoperative time, thereafter the pyelography will be done to confirm the integrity and free flow of the contrast medium through the ureter to the bladder. During the hospitalization the drains and catheters are sequentially removed one by one to discharge the patient without any drains usually on the 3-4 postop day. 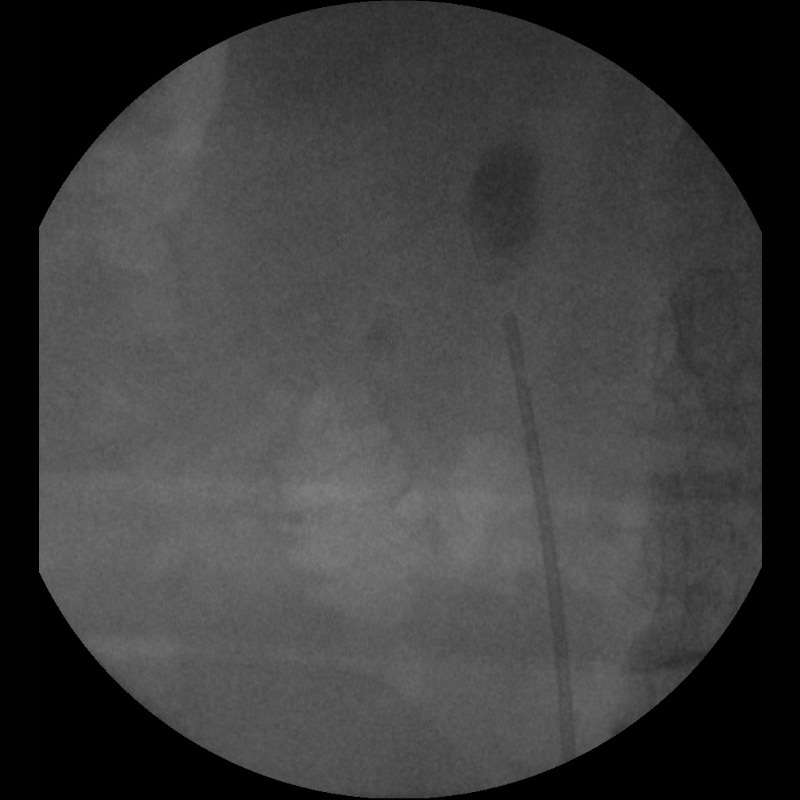 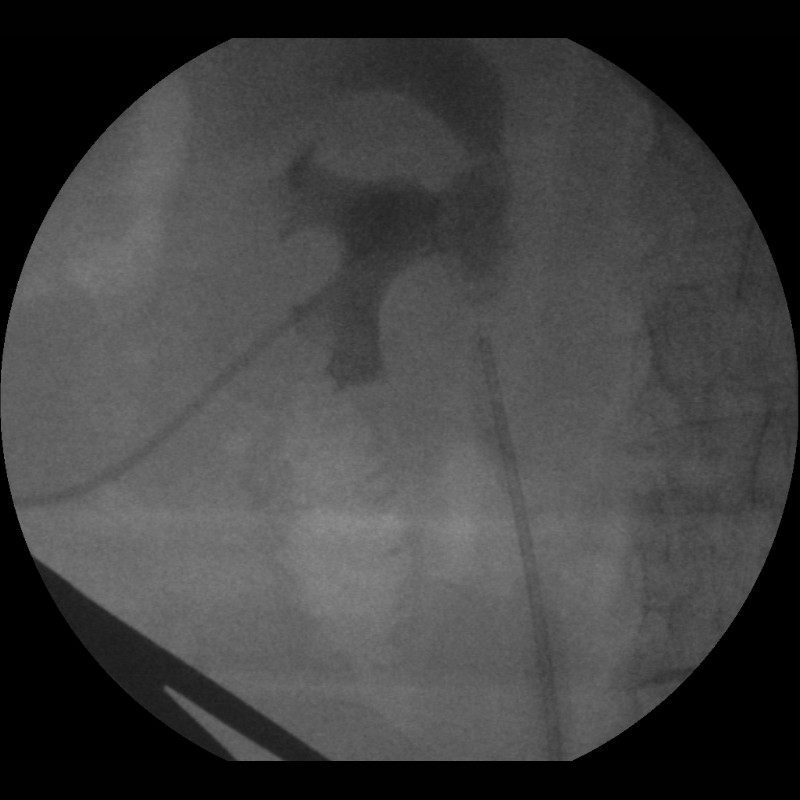 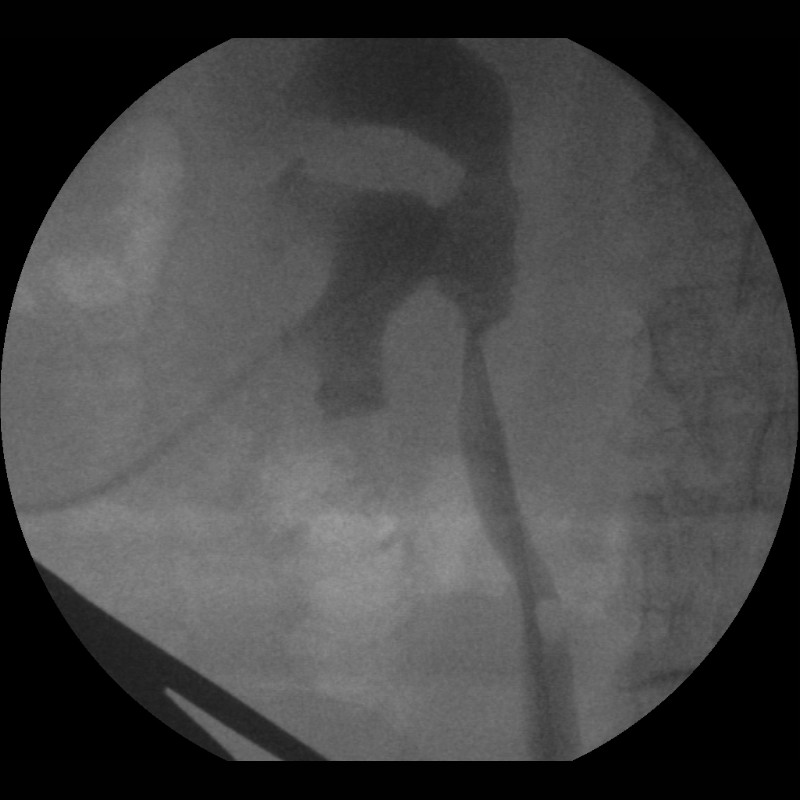 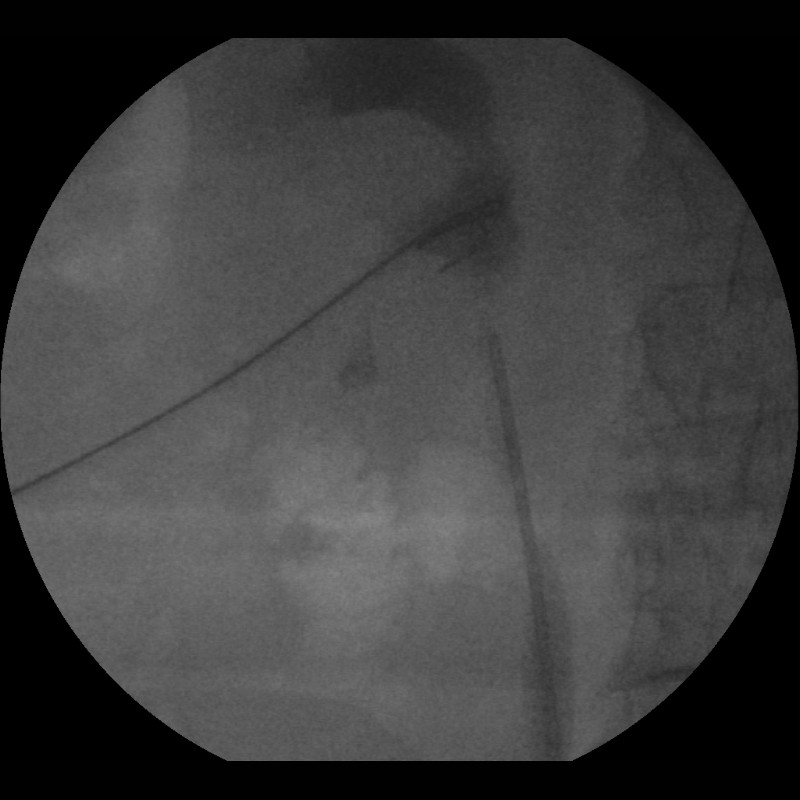 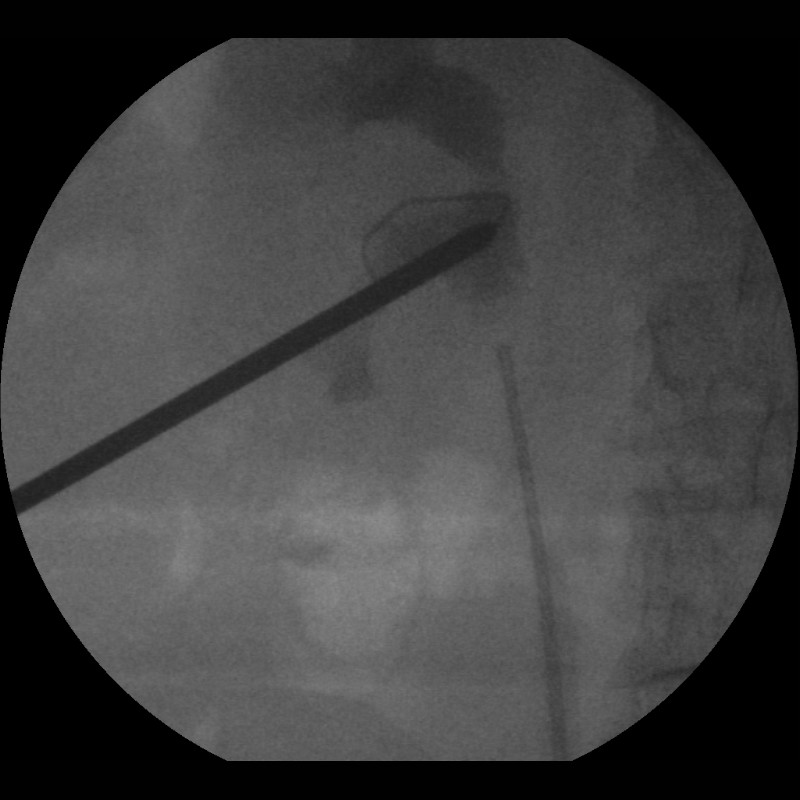 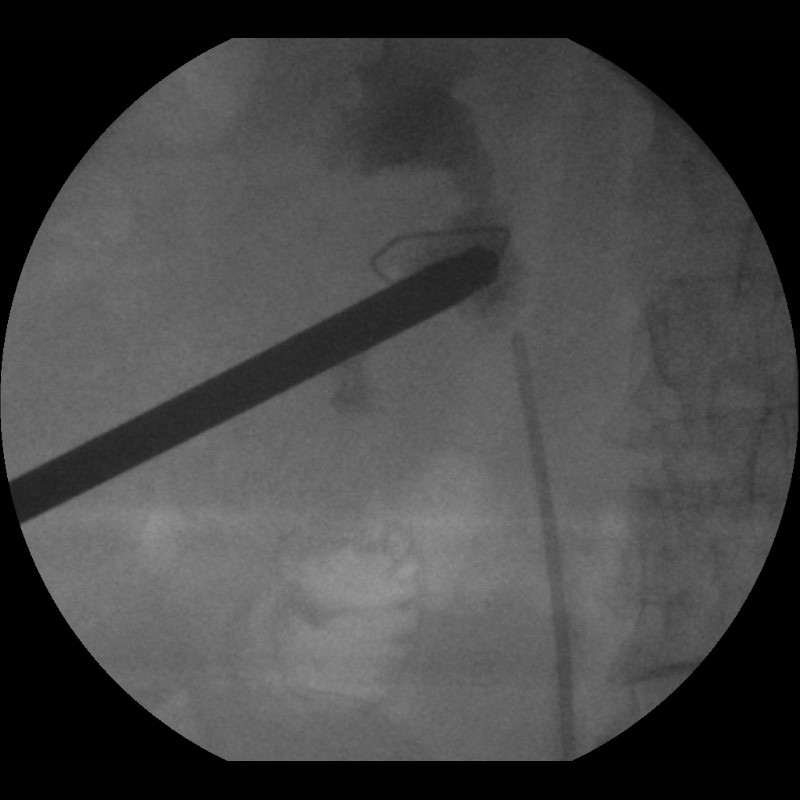 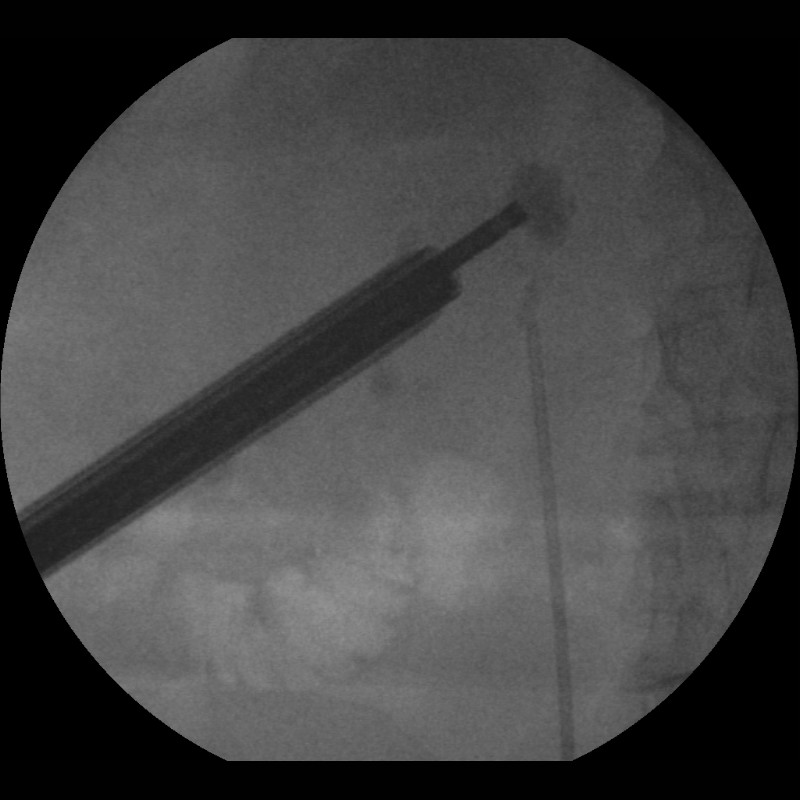 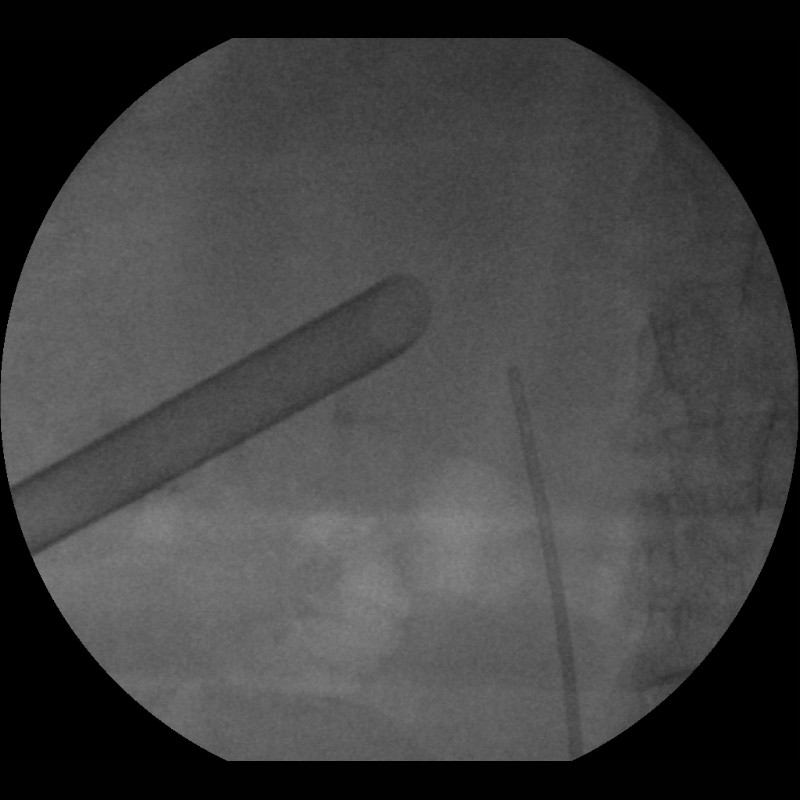 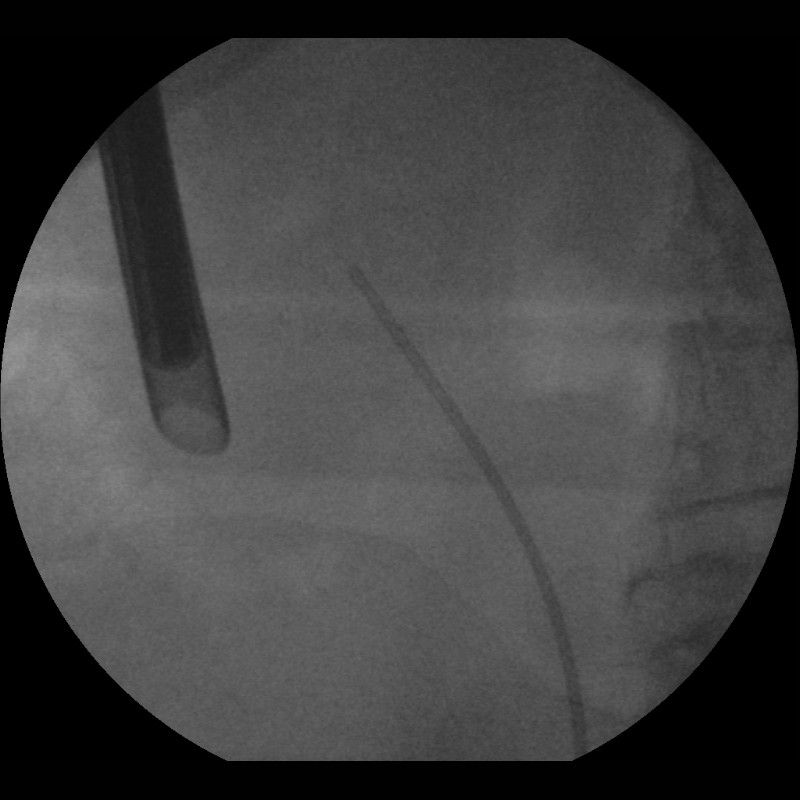 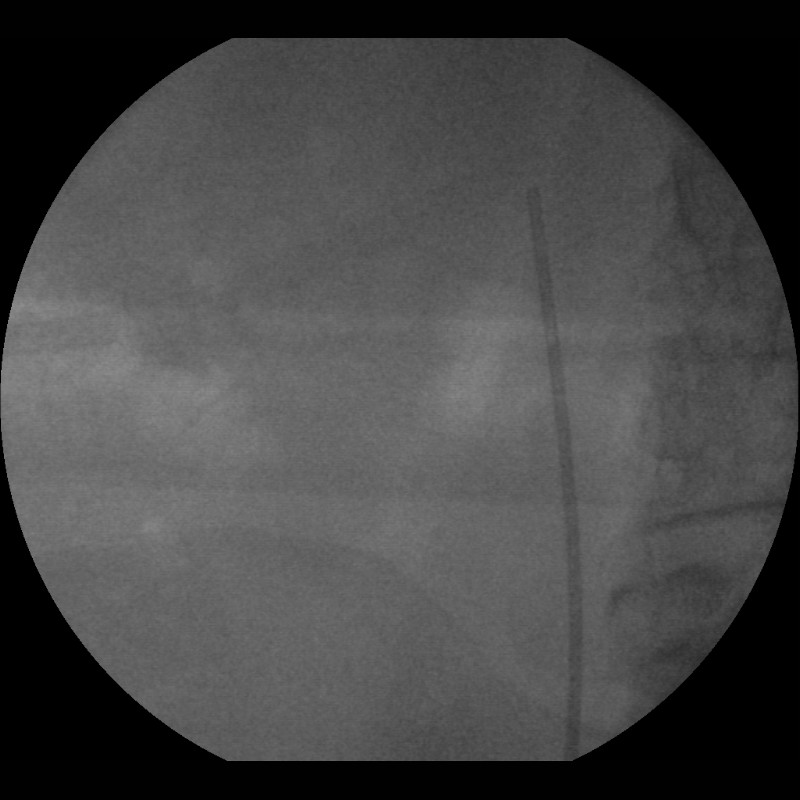